On July 7th 2006, at Fairford, Gloucester e=motion, the world electric vehicle land speed challenger will attempt to cruise past the existing UK record of 139mph (224km/h). The 522kW electric car is already the fastest vehicle of its kind ever designed and built in the UK, having posted an FIA Accredited 189.9mile/h (305.6km/h) during half-power testing in Nevada last year. TransDev belts are it’s heart. 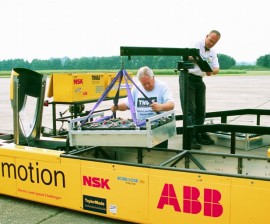 Amongst the leading sponsors and supporters for the project, Transdev, the UK’s premier-league mechanical power transmission specialists have designed the main drive around Breco® ATP15 GEN III belts and precision ATP pulleysfor the extremely demanding transmission system used on the 10 metre long vehicle.

Designed and built in the UK, e=motion is rear axle driven via a five pulley system using a single 75mm wide ATP15 GEN III belt. A belt drive rather than a geared drive system was considered the most efficient method of transferring power from four, 75kW motors to the axle and provides a mechanical reduction for the motors which run up to 6,000rpm, allowing road speeds of more than 300 mph. 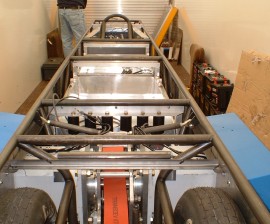 Powered from fifty two, 12 volt, lead-acid batteries, the force-cooled inverter motors will run for only 3 minutes or so from each charge and will produce a combined output of nearly 530 kW with acceleration controlled entirely by ABB variable speed drives. As the e=motion vehicles’ amazing acceleration, faster than an F1 racing car, is the key to the record attempt, the power transmission system will be taking a significant pounding. The choice of ATP15 GEN III belts and ATP pulleys are a critical factor in determining a design realistically capable of achieving the new record and reflects the quality and durability of the product.

Breco & Synchroflex GEN III timing belts provide up to 60% higher power transmission than the standard version and combines a unique, more tightly packed, neutral tracking, high tensile steel cord structure with wear resistant, polymer loaded, polyurethane for longer life, optimised belt tracking, reduced noise and maintenance free operation. Available in 7 standard belt widths from 16 mm to 150 mm, with other special widths to order and in standard lengths up to 5000 mm, the range is complemented with AT3, AT5, AT10 and ATP10 pitch variants and is available in a wide range of configurations including single or double sided versions, reinforced belt backings, anti-static, coloured, machine ground and punched versions.