Prometheus steals fire from the gods to finish with electric car awards. Pupils at Two Rivers High School are using SYNCHROFLEX GEN III (Synchroflex® AT5 GEN III) belts and precision pulleys supplied by Poole based Transmission Developments (TransDev) for its Greenpower Formula 24 electric racing car. They have won 5 awards in just 3 races in their inaugural year culminating in ‘Best Newcomer’ in the fiercely contested National Final held at Goodwood on 19th October. The electric car, called Prometheus was developed by students from the Tamworth schools’ TRS Racing club which was set up to channel pupils with an interest in practical work towards achievable projects and build technical skills and self confidence. The ImechE sponsored Greenpower competition, now in its tenth year, involves secondary school students building an electric car under design guidelines which include the use of the same 24 VDC motor and battery power pack as other entrants but with flexibility for the power transmission system and chassis construction.

Each race involves covering the maximum distance over a four-hour endurance period, with each team comprising 6 drivers and 6 pit-crew. The TRS Racing team’s achievement is made even more remarkable by the fact that Two Rivers is a special needs school catering for pupils between 11 and 18 with mild to severe learning difficulties, and the only special needs school from 420 teams and 75 finalist in this years competition. TRS Racing has enjoyed considerable support from LDV Vans as well as Lola Racing and TransDev who’s Technical Department have given application assistance for the design of the transmission. Lola has even helped with weight-saving composite technology used for the chassis. Several local companies also provided help through work experience programmes and pupils have been able to apply manufacturing skills they could not have gained at the school without their help. 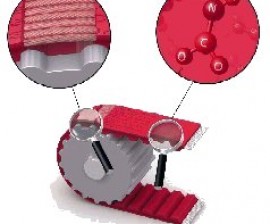 The drive train used on Prometheus is a single stage design based on Synchroflex high-efficiency GEN III, AT5 belts with a 5 mm pitch and 25 mm width supplied with matching precision pulleys in aluminium with zinc plated steel flanges. GEN III endless timing belts feature a unique trapezoidal toothform and are manufactured with closer ‘S’ & ‘Z’ wound high grade tensile steel tension members in a wear resistant polymer loaded polyurethane. In comparison to other manufacturer’s timing belts the range provides neutral belt tracking and reduced pulley friction and also benefits from longer life, reduced noise and maintenance free operation. GEN III is available in AT3, AT5, AT10 and ATP10 pitch variants in 7 standard belt widths from 16 mm to 150 mm, with special widths to order. Standard lengths are up to 3800 mm with increased lengths on request. The name Prometheus was chosen from Greek mythology. This legendary character stole fire from the gods and gave it to mortals – TRS Racing have taken composite and other high technologies from elite companies and used them in a school environment, so the name seemed appropriate.

Greenpower is a company dedicated to promoting engineering and technology as careers to pupils throughout their school life. They have been running the ‘Formula 24′ series for secondary schools since 1999. In that time hundreds of schools and many thousand children have played an active part. Each entrant is issued with a standard 24 volt electric wheelchair motor and four 12 volt car batteries (two on the car, and two on charge in the pit lane). A series of endurance races at motor circuits around the county build up to the National Final; held each October at the historic Goodwood Motor Circuit. Each team must comprise six drivers and six pit-crew. In addition to its Formula 24 for secondary schools, Greenpower also holds the Goblin Formula series for primary school children and the new Formula 24+ for teams aged 16-21 in any form of full or part-time education. The company is sponsored by the IMechE, The Ford Motor Company, Prodrive and many other leading organisations. For further information see www.greenpower.co.uk